I first heard about Shuffle Festival back in the summer of 2014 when I learned the programme included a screening of Danny Boyle’s 28 Days Later in a cemetery.  Cut to three years later, and I’m volunteering at Shuffle, an annual event held in East London (the brainchild of Kate McTiernan and Lizzy Daish) to celebrate the arts, people, and urban regeneration.

Within an hour of arriving at the festival three years ago, I had asked about how I could be part of it, offering to volunteer at a future festival. Since I’m hardly local (I’m B13, not E3) it wouldn’t be simple.

Flash forward to August 2017 and I’m wearing my volunteer shirt and working with Lizzie Prentis, helping to paint signs, build box offices and bars, moving chairs around the park, generally mucking in whenever and wherever needed.

Community cohesion is at the heart of Shuffle Festival and over the weekend we prepared a feast for 500 Tower Hamlets residents to enjoy. I spent most of Friday working for the restaurant chopping and grating veggies and looking like I knew what I was doing in a kitchen (I don’t). 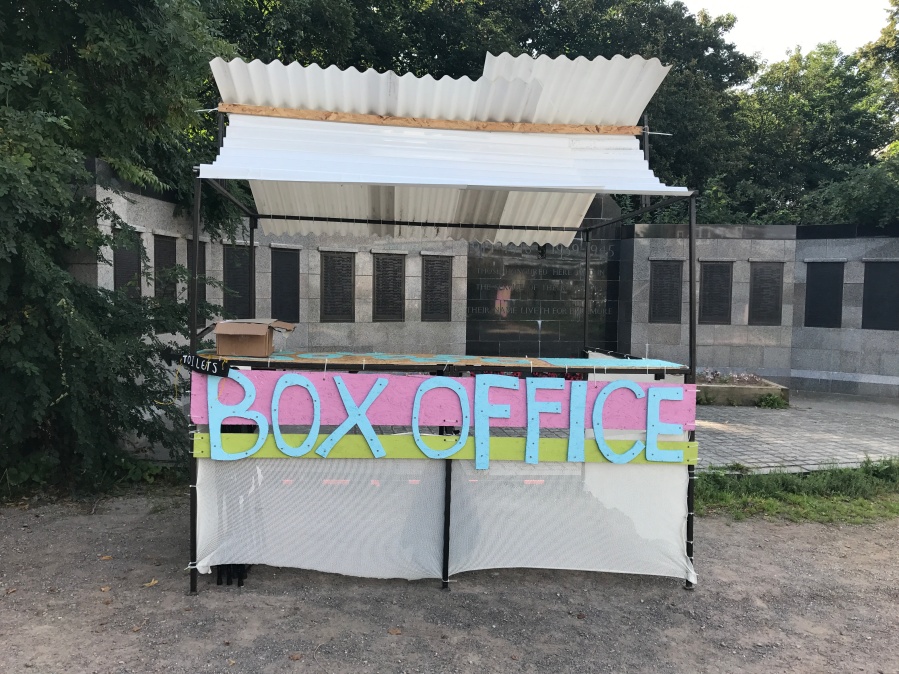 Friends of Tower Hamlets Cemetery Park do inspiring work to keep this park a safe and beautiful space for people to enjoy. And, according to award-winning director and Shuffle curator Danny Boyle, more people are buried in THCP than are alive in Tower Hamlets today.

I didn’t get to see much of the festival itself, however I did eagerly support the best coffee I’ve had in a long time, served out of a little blue Piaggio. Kudos to the folks at Ello Darling Coffee  for keeping me fuelled over the weekend!

Screenings of Danny Boyle’s Trainspotting 1 & 2 were big draws in the schedule and I was working in the cinema areas both evenings. I have heard Danny Boyle speak about his work and other subjects many times, and class Sunshine and Trainspotting as two of my all time favourite films. Comedian Steve McCann hosted an insightful Q&A after the Saturday night showing of Trainspotting , prior to dashing off and presenting his own act on another stage, Memoirs of a Geezer.

One of the stages in the park was home to a very entertaining karaoke session, hosted by CALM (Campaign Against Living Miserably) – a charity raising awareness about (and preventing) male suicide. CALM joined Danny Boyle on stage on Sunday evening to introduce and discuss T2: Trainspotting.

Shuffle is a not-for-profit festival which is the perfect alternative to the noisier and more hectic summer events in the city. It was the overall vibe of the festival which appealed to me when I first attended it, and I learned that many Mile End residents are unaware of the park’s existence and what events are held there. Shuffle uses local talent and locally sourced resources to bring together residents and make them aware of their neighbourhood and its projects.

More information on the festival can be found here, including information on how you can get involved and the Short Film competition which they run at each event.