The first time I met Jon Bernthal was at London’s first Walker Stalker Con in 2016, when their events were in their heyday, viewing figures for the show were pretty high, and I knew him as Shane from The Walking Dead and from The Wolf of Wall Street.

Since then he’s become one of my favourite actors, stolen Season 2 of Daredevil from under everyone else’s nose and even led his own show with Netflix’s The Punisher, showing a very human side to Frank Castle and winning over critics with his performance. Last December Jon Bernthal was a guest at For The Love of Sci Fi, a weekend of signings, Q&As and photoshoots run by Monopoly Events in Manchester. 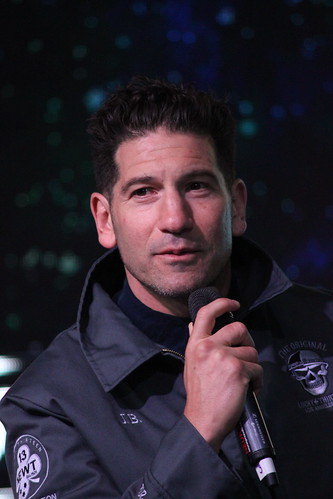 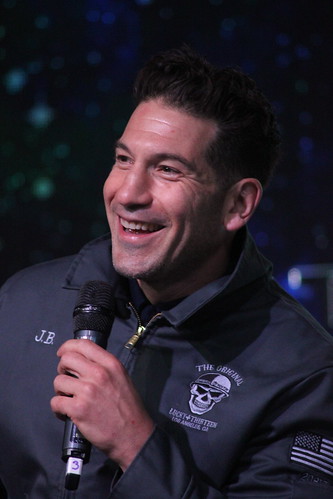 The weekend began with Jon Bernthal’s Q&A hosted by Ben Fenlon, and it’s here that I took these photos. I’d bought a front row pass to get some good shots and to get as close as possible, even if I did bottle out of asking my questions, saving them until I met Jon later during the autograph sessions. 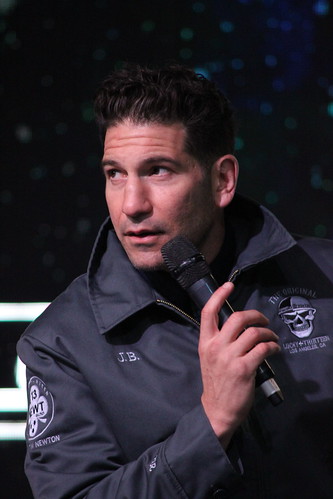 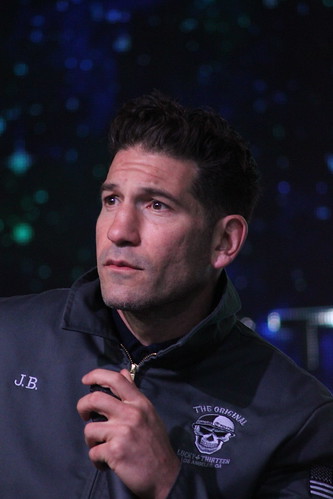 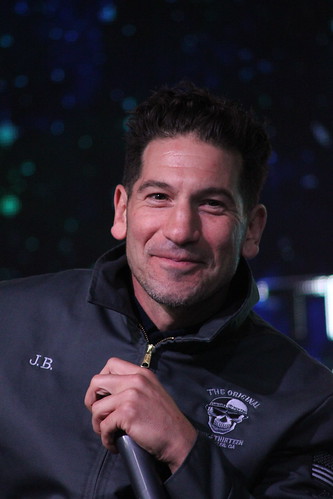 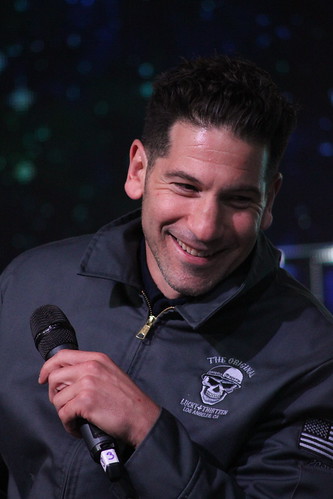 Jon’s spoken in many interviews about how The Walking Dead came along just at the right point in his life.

At the Q&A he said “at the end of the day if you put six actors in the middle of the woods and tell them to pretend there’s some fucking zombies out there, if one person doesn’t take it absolutely seriously, you all look like a bunch of assholes.

We were all there, out in the woods in Georgia, it was beautiful, and I’ve never had another experience like it  so I’m enormously grateful for it. Last summer when I was filming The Punisher I got to go back and spend a day, to say goodbye to Andy and to do one little scene with him. I flew down, and had to fly right back to New York and I see so much of the spirit of the show is still there.” 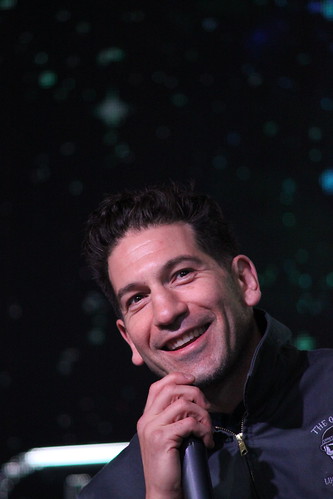 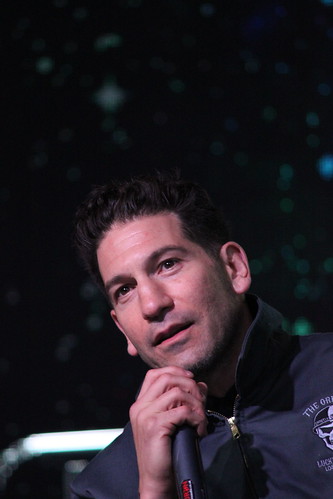 Another story which I loved to hear him tell was when he was on his honeymoon driving across country in a temperamental truck, fresh after wrapping Season 1 of The Walking Dead, and seeing a sign for Love Actually, telling his new wife they had to go and see his friend Andy Lincoln in it. They spent the rest of the trip jump-starting his truck and singing Love is All Around. I love the fact he remained such close friends with Andrew Lincoln and Sarah Wayne Callies and they call each other regularly and meet up when they can. “They’re my family,” he said in the talk. “I’m so grateful for them.” 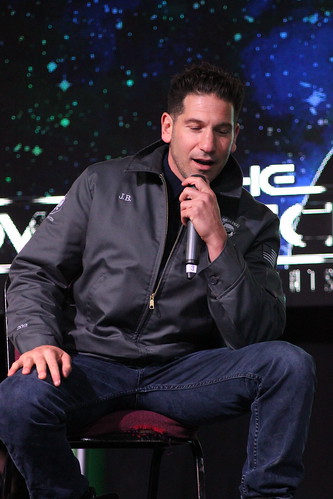 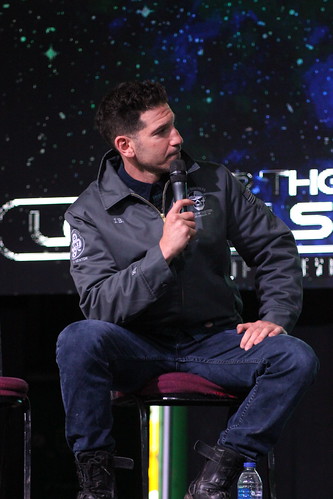 Jon is always quick to praise his crew and his mentors and co-stars when talking about his projects, and when he was asked about his favourite scenes to film as Frank Castle he showed a great love and respect for the stunt community, a team he considers himself part of.

“I think my favourite scenes to do, honestly, were from Daredevil. There’s a speech that a real guy named John Kelly, an American Marine veteran wrote, a monologue about coming home and it’s Frank talking about coming home, saying he’s too tired to read his daughter a story at night, and the next day he lost her, she was killed. It was such a beautiful speech and normally I’m such a pain in the ass to the fucking writers, I’m always saying ‘he wouldn’t say this’ and ‘let’s do this’…but this speech was perfect.

It was in Daredevil season 2 by the graveyard and I think only a real veteran could have written that, and it was such a gift, and as far as finding the character with that speech, as far as finding Frank Castle’s humanity, I knew I could go as far as I wanted, turning my back on the audience and be as vicious and brutal as I wanted because he’d revealed his heart. I’m really grateful to John for writing that.” 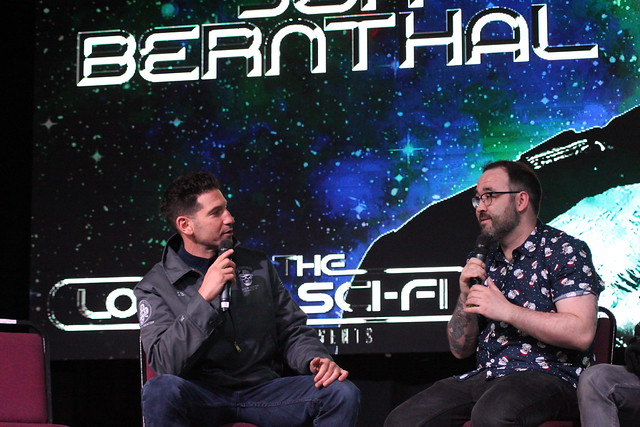 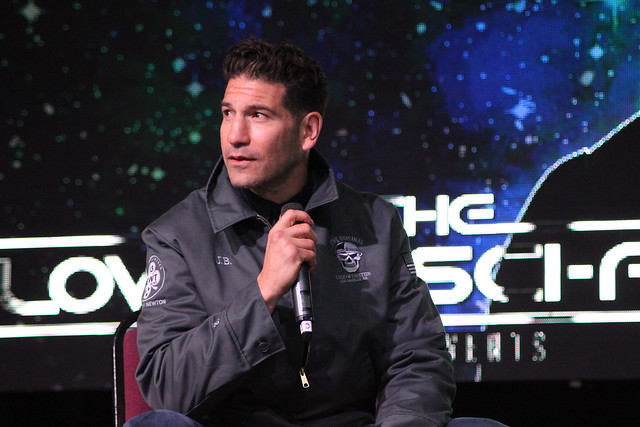 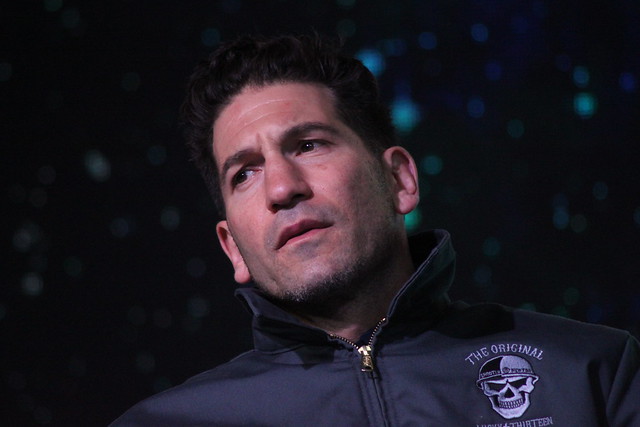 Over the next two days I got a couple of photoshoots with Jon as well as autographs. On the Saturday I asked him to sign my Punisher vinyl – the artwork is beautiful and I wanted it framed and on display, and when I went back to see him on the Sunday I got a photo of my favourite TWD character Shane, and I rambled a little about how great a character he was.

There were a number of things I wanted to ask him/talk to him about which is I why I ended up going back to see him on the Sunday before my second photoshoot. This is the one from Saturday.

The event more than made up for the disappointment of him not attending Walker Stalker earlier this year. This was my first Monopoly Event and I liked the size of the venue and the way the panels were run (especially the good questions during the Q&A sessions). It wasn’t overcrowded or overpriced and events which allow you to pre-book autographs, front row seats and which guarantee your tickets in the event of cancellation (I’m side-eyeing you, Walker Stalker) appeal to me. Although I’d met JB before, it was amazing to hear him speak with such love about some of my favourite characters and get some photos which I’m surprisingly pleased with!

The rest of my photos from that day are here at Flickr.